That One Time I Ran A 5k and Got Lost 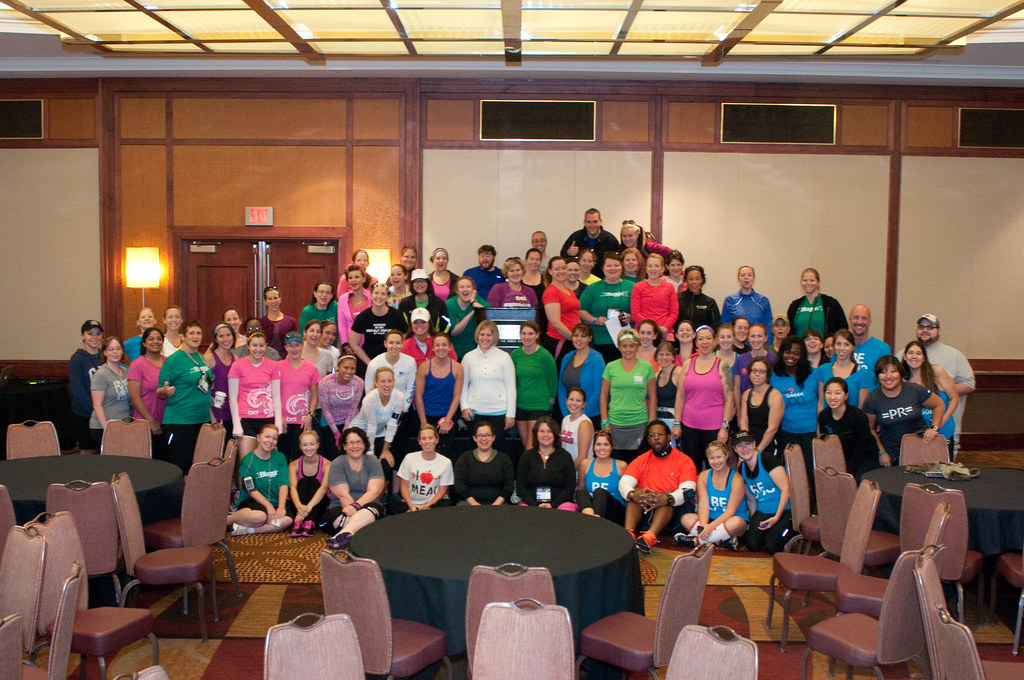 {Disclaimer: I’ve been meaning to post about this race for 6 months, better late than never!}

When I said I was going to run a 5k at Fitbloggin last February I was excited, scared and nervous.

Most people would spend the 7 months in between, training and preparing for such a race. Unfortunately, I am not most people.

When I arrived at fitbloggin I felt great about running this race. When people asked if I was going to run it, I gave a hearty “heck yeah!” knowing all the while I had trained not even an ounce for this. Truth be told I hadn’t even been near a treadmill in months. I train in other ways like spinning and Zumba, but running? not so much.

So the night before the race as I am preparing for this race, I started to doubt myself. I started asking myself why are you doing this? I even thought to myself “if you sleep in and order room service NO ONE would be the wiser.”

But you know who would know?

Fitbloggin gave me so much inspiration and motivation that I dug deep got up at 6am and headed over to the Hyatt to start my race.

Again when I got there I was crazy intimidated. All of these seasoned runners and me completely unseasoned yet I’m in the pack with all of them.

Reebok was nice enough to sponsor our 5k and we had a couple of awesome peeps from reebok running along the trail with us, which gave me comfort because my biggest and most huge fear was getting lost in Baltimore trying to run a 5k.

And thats exactly what happened.

I heard the reebok guy describe our trail, he made simple gestures saying that the path was super “easy” and it shouldn’t be a problem. 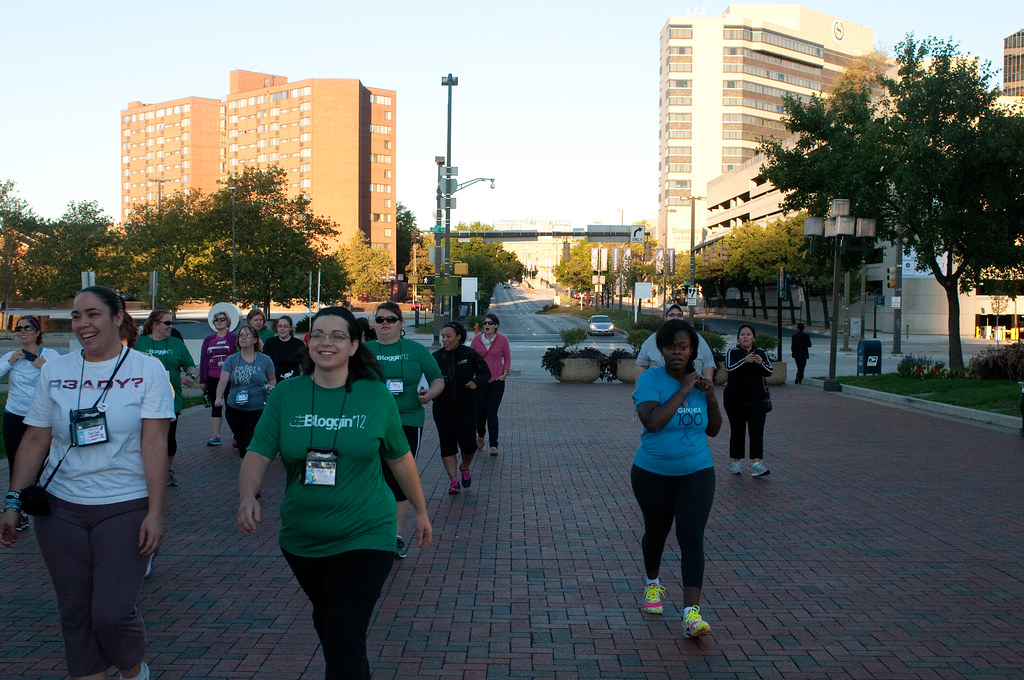 I still can’t believe this was 7 months ago, my body has changed so much! Via Carrie D. Photography

He also said that we would be running on red bricks for the first mile and a half.

For some reason that stuck with me.

When the race started I let all the runners go, I made sure they were running for at least 3 minutes because I didn’t want to put ANY pressure on myself. I have a tendency to do that, yanno.

After everyone was gone, I started on my little jog. I was pretty impressed with myself. I was jogging at a regular pace, and for longer than a couple minutes.

Sidebar: when I DO get on the treadmill I have never run for more than FIVE minutes.

When I realized I was passing some people I started cautiously gaining confidence. Every time I was about to start walking a new song would start on my iPod and start me up all over again.

I was feeling great. I was hurting, my breathing was suspect, but I felt great. Running along that water was just simply gorgeous.

Before you knew it the red bricks were over.

I RAN A MILE AND A HALF WITHOUT STOPPING

Shortly after that I started to run walk. I was in a weird place all of a sudden…the real runners were wayyyy ahead of me and the walkers were behind me.

I started following a couple of people that I knew were from fitbloggin except they started running a lot quicker than I was walking. It was no problem because there was a chick in a pink shirt that had been running with us the whole time and I kept her within a block so I didn’t feel so lonely out there.

Except when everyone else was long gone, I had followed her and I saw she had stopped to stretch.

I asked her “hey! Do you know where we are going?”

She gave me a look of confusion mixed with a little pity.

Me: “you are not running with fitbloggin’?”

I am lost in Baltimore.

I started walking back trying not to freak out all the while looking for other familiar faces, there were none. I pulled out my map from my bra and I heard someone yelling from far away.

It was the nice man who led the pack.  He saved me!! 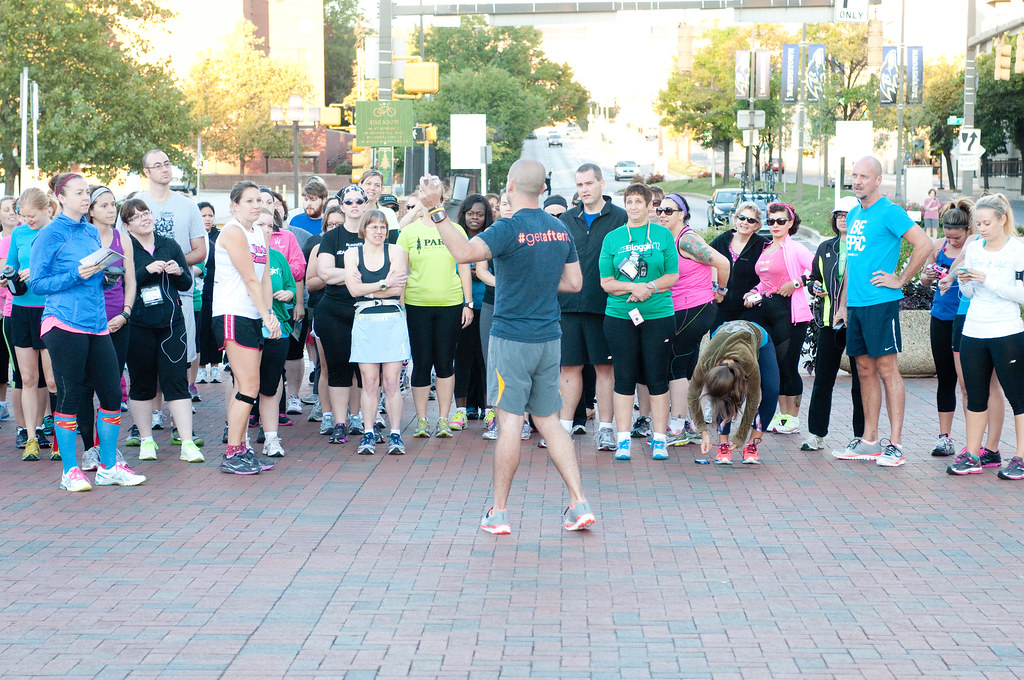 I got back on the trail and was soo happy when I finally reached the end. I was happy to get back to where I started and I was also so happy to end this trip on such a wonderful note.

Have you ever signed up for something you did NOT want to do, but did it anyway?

I never want to run 5Ks! I only do them to support causes, primarily Susan G. Komen annually but I never train for them, matter of fact one year I got there so late bc I had worked the night before that I just walked with some of my co-workers. I have to say, this was funny but super glad you got back on track. I see the hard work you’ve been putting in looking back at the older picture. Very nice! I really am excited about this conference!

Joi, I don’t even know why I do them, maybe I like a runners high a couple times a year? I also only run them for charity. You totally will have a good time, the fitbloggin community is really great.

Very funny! My sisters and I have somehow all convinced each other to run our first 5k together this summer. I do not know what any of us were thinking, but I know I don’t want to be the last one to finish, so I guess I’d better get out practicing. Hopefully the route will be well-marked for me!

lol – that is so funny!!!! You should have done a little training first but good on you for giving it a go:) Most times when I cycle with The Cyclist I feel that I have signed up for more than I can manage!

I would be terrified too, you don’t want to be lost in Baltimore. You’ve made some huge progress with your weightloss, you look much slimmer now. Pics are a good way to keep track of things.

Oh, I can see how this would totally happen! I see myself doing the same thing. Right now I’m doing 13 in 2013 because…not sure. So I said I would do 13 5ks this year. Have I ever run one before? Not before January. But I’m running them. Very, very slowly.

Okay, I considered walking a 5K awhile back…and the main reason I didn’t was because I was terrified I wouldn’t be able to find my way (being a walker, I’d obviously be far behind the runners). I was told that I was being CRAZY and nobody could EVER get lost on one of these things. HA! I KNEW I wasn’t crazy!!
So glad you got back on the course quickly!!
If I ever do a 5K, I’m only doing it with a partner I can keep up with so at least if I’m lost, I’m not alone!! 🙂

I would’ve been terrified, if I’d gotten lost! I haven’t signed up for anything recently, but I hope I’m able to overcome my fears when confronted with the unfamiliar. Congrats on a strong finish girl!

OMG!! Glad the guy was there to guide you back to where you needed to be. I have run a 5K after a late night of eating chicken wings and it was cold outside. I thought twice but I knew I would feel bad about not doing it so I went for it. It was a sucky run but I got out there and thats all that matters.

It was Priceless. She was like wtf is this girl and why is she cornering me while I stretch asking me crazy questions? lol sad part is, she didnt even try to help me find my way back! ha.