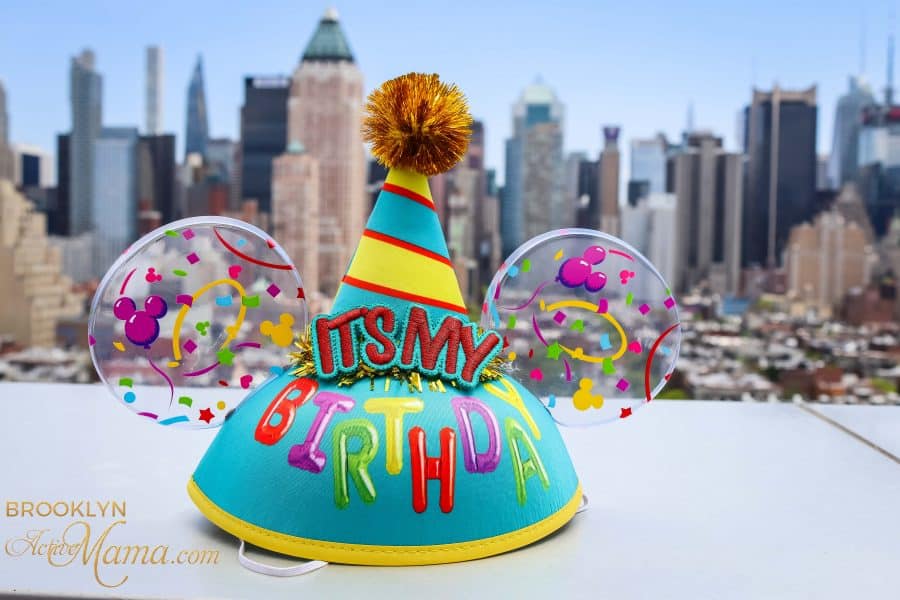 Last week I was able to enjoy a day full of magic at the Disney Social Media Celebration held on the west side of NYC at the very beautiful Ink48 Hotel. As you all know, I share a lot of Disney World content on BAM so I was super excited to hear all about the new additions coming to Disney this year and next! 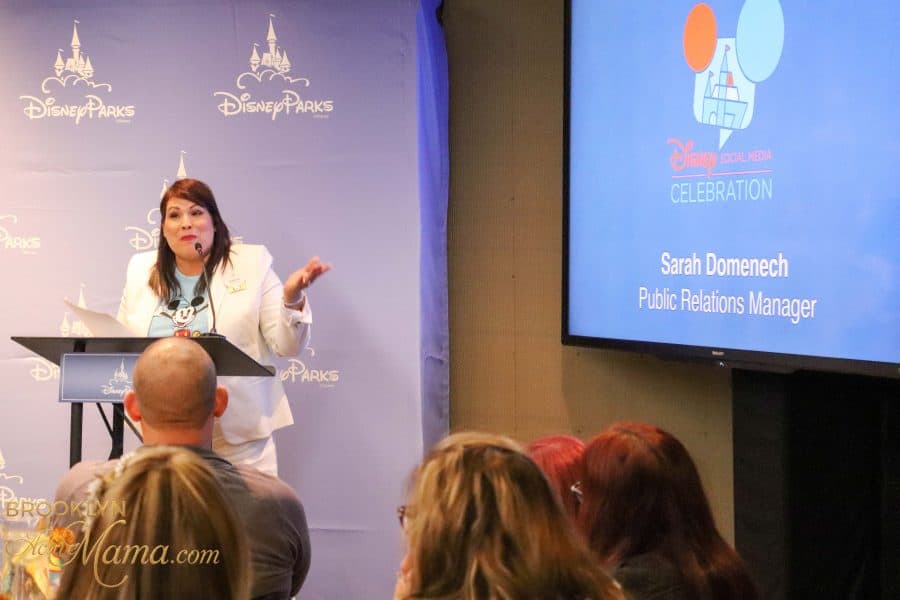 The really cool part about getting an invite to the Disney Social Media Celebration is that it’s a combination of learning tips to help you grow as a creator and a writer, but also having Disney share with us some of the awesome insider stuff coming up with Disney. It’s truly one of the things that I admire most about the theme park, they are always finding new and innovative ways to keep me coming back. 🙂 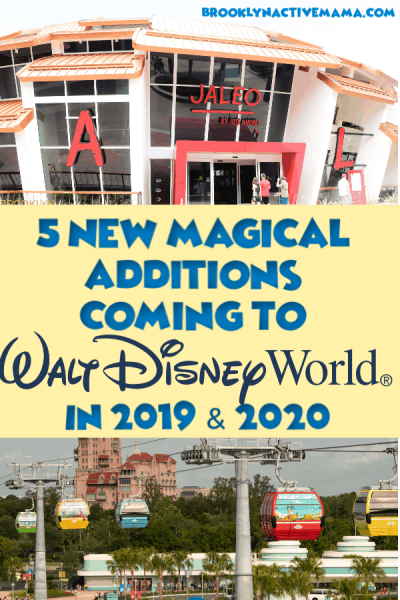 Ever since I discovered the magic of DisneyWorld in 2005–when my husband asked me to marry him in front of the Magic Kingdom castle, I have watched and experienced the brand grow more and more. I am excited to even be a small part of story. 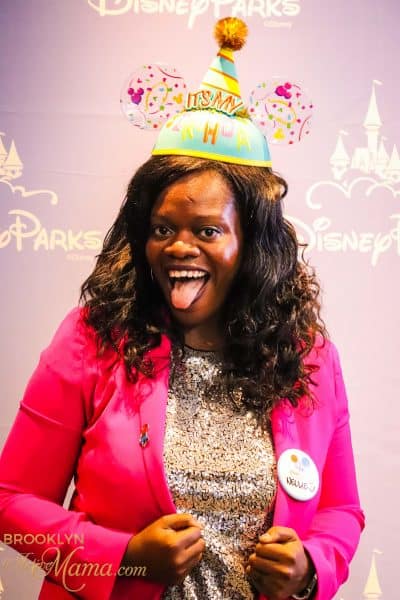 It is also a really good time to get out of the house and spend time with adults! Since I’m usually home with the baby everyday it was SO nice to see all of my local friends and catch up with them. 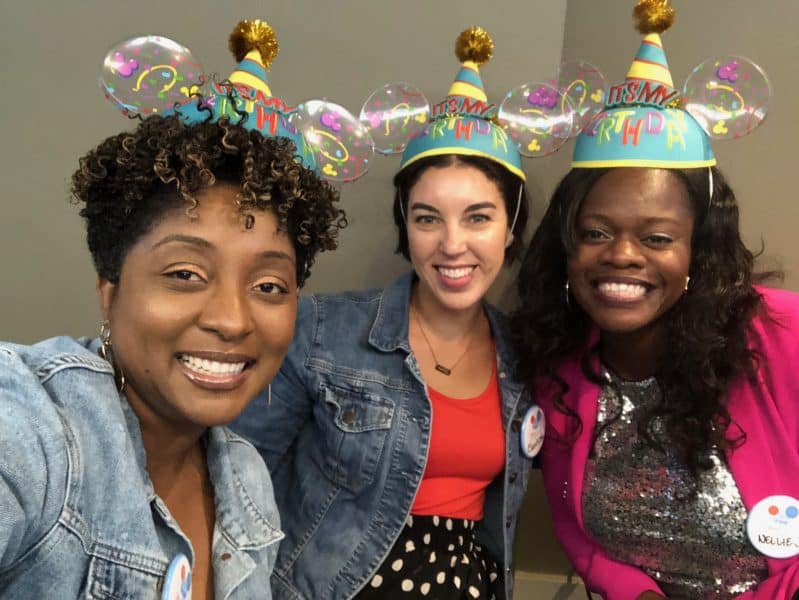 Although we were there for only a few hours, we learned SO much! From tips for authentic content creation to how to produce a really great video, we were all furiously taking notes and figuring out ways to take our platforms to the next level. 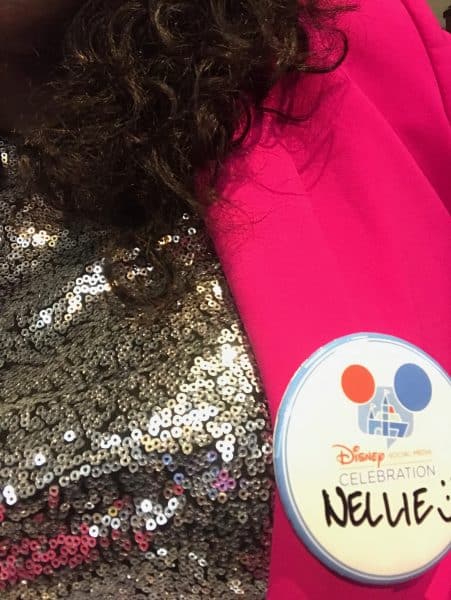 We got to hear about a TON of new amazing things coming to Disney World, Disneyland, Adventures By Disney and so much more. I wish I could share everything with you but I’ll just share my favorite bits of news that I know you are going to love. 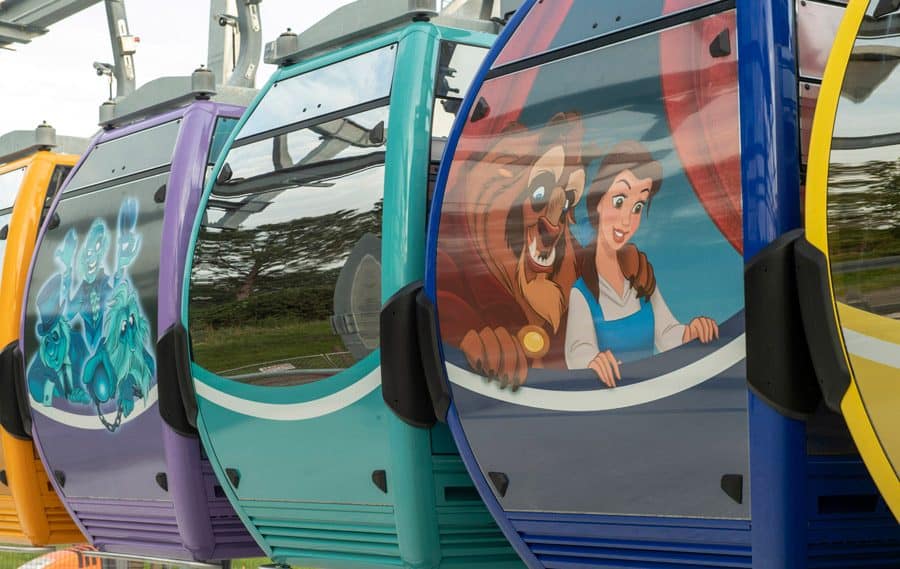 When fall arrives, guests of Disney Skyliner Resorts – Disney’s Riviera Resort, Disney’s Caribbean Beach Resort, Disney’s Pop Century Resort and Disney’s Art of Animation Resort – will be able to enjoy the benefit of being whisked between Epcot, Disney’s Hollywood Studios.  How cool is that? 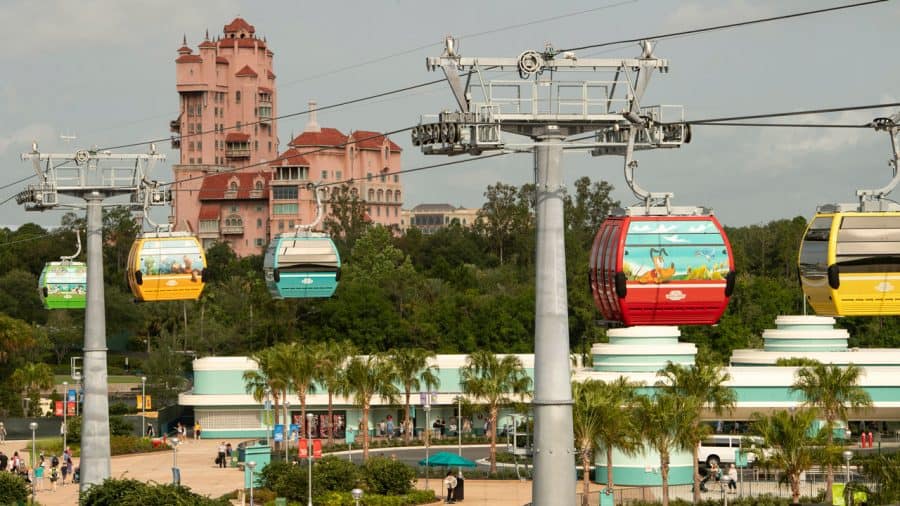 So excited for this!

You may remember last year when I went to the ESPN Wide World of Sports for a hosted trip, I was able to show off my basketball skills even while super pregnant! I am SO over the moon for the new NBA Experience which I will HAVE to try this year!

Update: I tried it and had so much fun! Check out my full review here!

We got the professional pictures back from the #espnwwos FAM trip media day and I think these are my favorite! You can even see my homey goofy in the background watching me lay it in! ???? #espnatdisney #rundisney #fitpregnancy

“This new destination at Walt Disney World Resort will hold its grand opening Aug. 12, when you can feel what it’s like to be a real basketball star by participating in 13 interactive and hands-on activities.

With a ticket to NBA Experience, you will test and improve your shooting and dribbling skills, get your photo taken while throwing down a rim-rocking dunk, and feel like a top draft pick, just to name a few of the immersive opportunities that will blend Disney magic with the high-caliber action of the NBA and WNBA.”

Shooting some early morning hoops at ESPN Wide World Of Sports ? ? when I told y’all that this would be a super active pregnancy I was not playing! ? #espnwwos #espnatdisney #rundisney #hosted 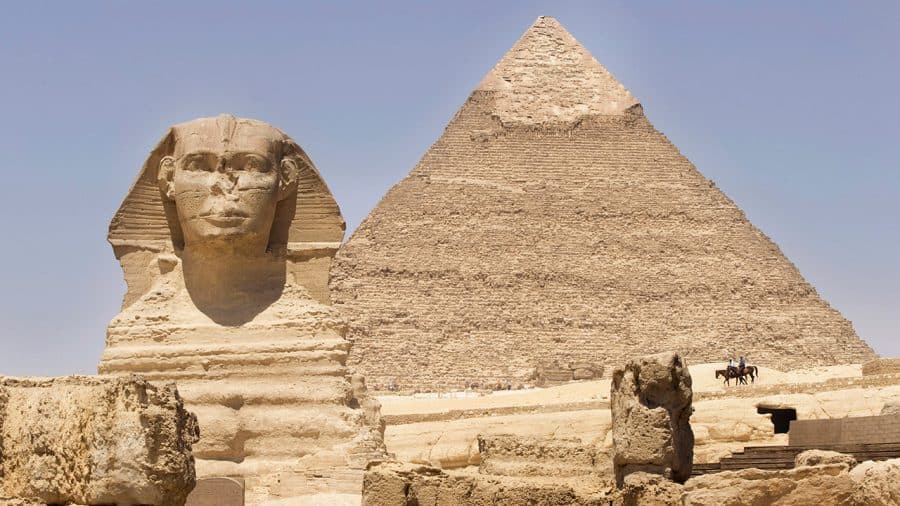 “With Adventures by Disney, families will be immersed in the allure of both ancient and modern Egypt during a skillfully planned itinerary developed with the trusted family travel expertise of Disney.”  This will be a 10-day, nine-night Egypt vacation! This sounds incredible and bucket list worthy. To learn more about Adventures by Disney or to book a vacation, visit adventuresbydisney.com. 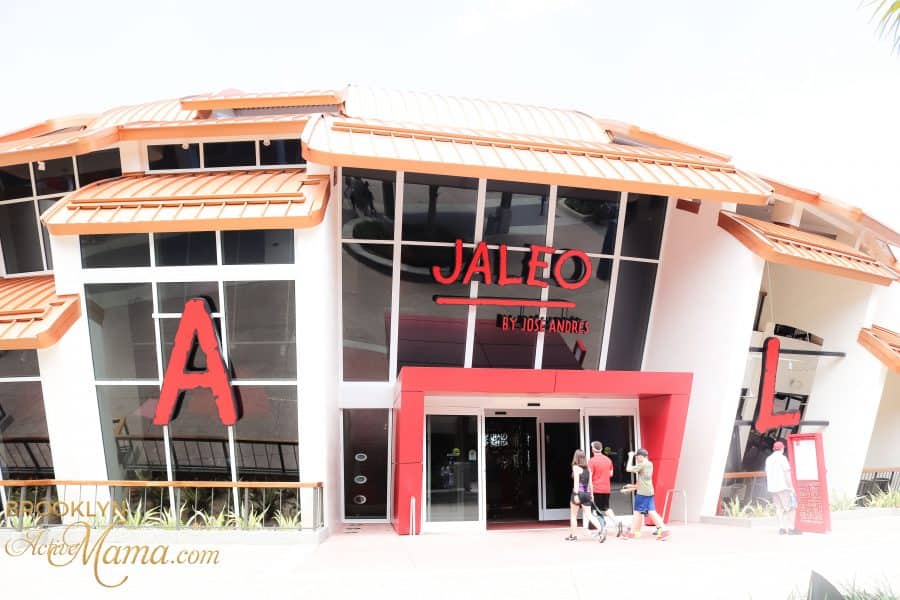 I wrote about this place last week so I was extra excited that it was featured as top restaurant during the presentation! 🙂

“The fifth and largest Jaleo location in the U.S., the first in Florida showcases the rich regional diversity of traditional and contemporary Spanish cuisine with an extensive offering of tapas, paellas, sangrias, and a selection of Spanish wines.” Anyone want to come taste testing with me?

I wrote about Marvel Day at Sea when it first was announced a few years ago, I am happy to report that not only is it BACK but Captain Marvel is joining the team too!

“During our epic Marvel Day at Sea cruises, Captain Marvel joins the largest collection of Marvel Super Heroes and Super Villains ever assembled at sea. You can meet this noble warrior hero throughout the day and then see her strength in action during the “Heroes Unite” nighttime deck show–a spectacular, stunt-filled battle between your favorite Super Heroes and some of their greatest foes.”

Marvel Day at Sea returns from January to early March 2020 with special five-night DisneyMagic sailings to the Caribbean and Bahamas from Miami.

A Special Appearance from Mickey and Minnie! 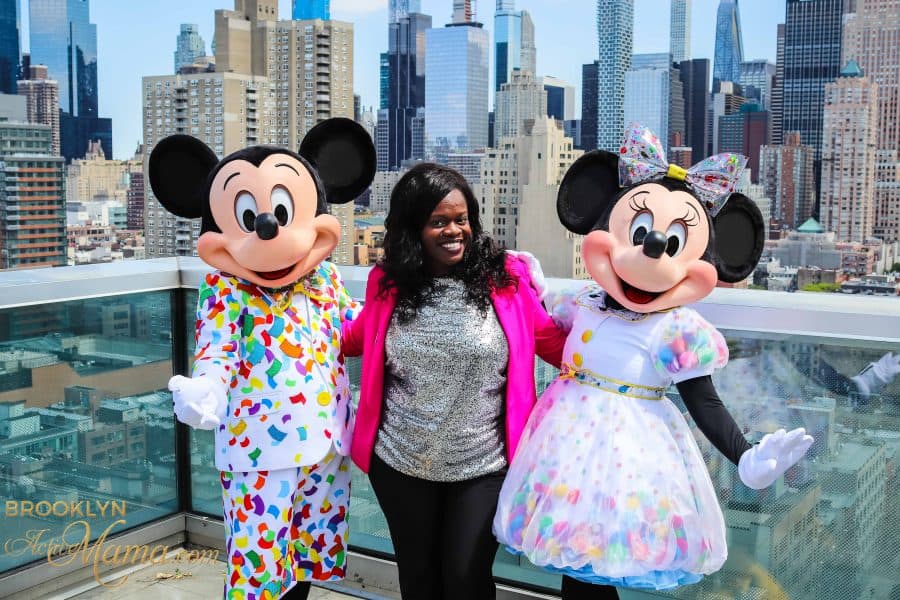 As the sweet icing on top of a very magical day, we were able to meet Mickey and Minnie themselves in their birthday suits! (Not THOSE birthday suits, but actual confetti filled outfits.) Taking pictures with the skyline in the background was the perfect way to end the day.

To stay on top of all of the latest news be sure to subscribe to the Disney Parks Blog!

And don’t forget to download your free Disney themed Luggage tags and/or your Free Disney Budget Planner for your next trip! 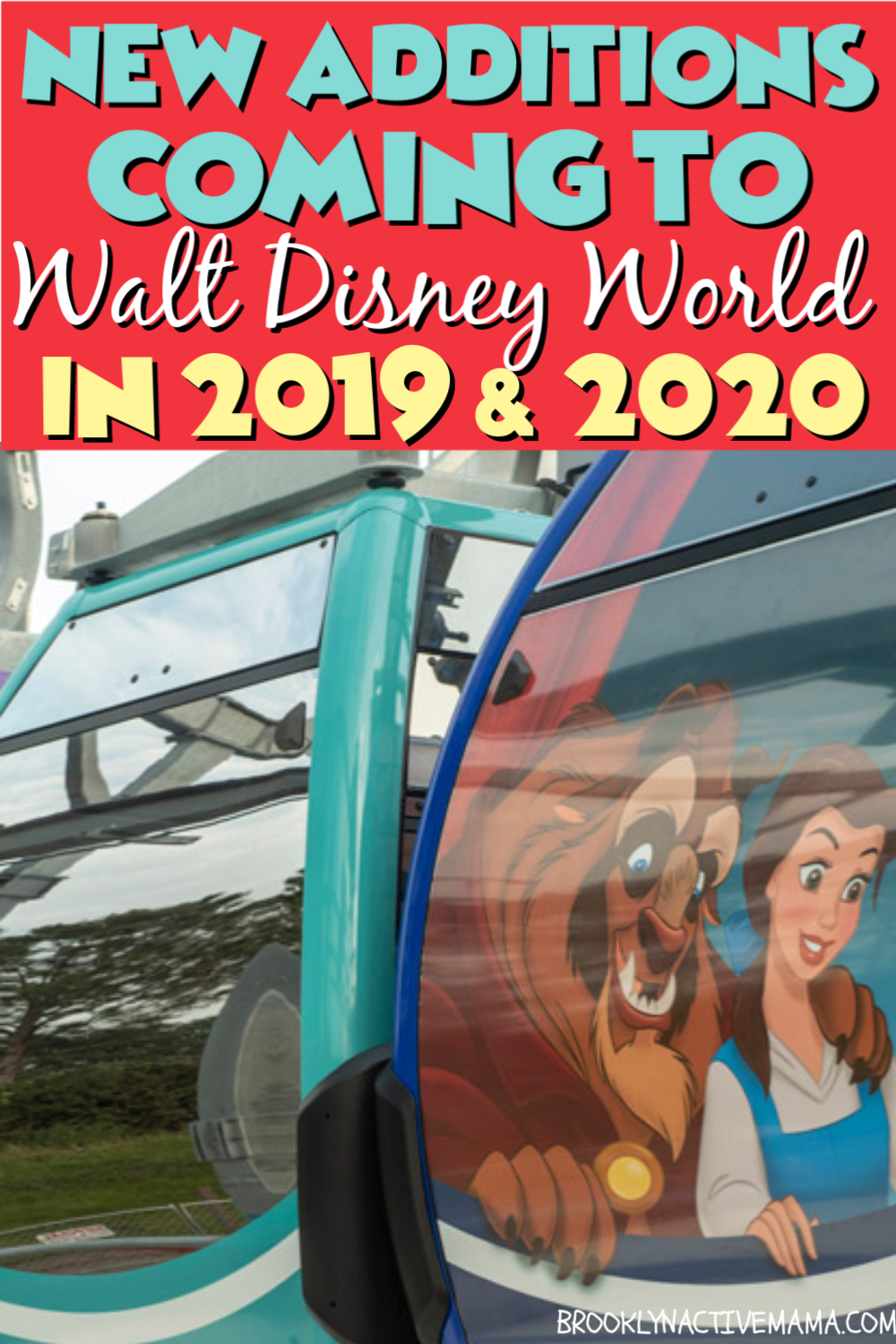 2019 Epcot Flower and Garden Festival: Must See Food and Attractions

I actually got to see the Skyliners a bit more when I did a VIP 2 weeks ago when I was there, as well as the back of Star Wars Land, too. But since I was backstage, I wasn’t allowed to take pics or videos. But omg, both look amazingly awesome from what I did see and cannot wait to experience when they do indeed open and I can. But thanks for sharing what you learned here, as you know I cannot ever get enough Disney (ever!). 🙂

I need to go to that restaurant. Captain Marvel at sea sounds fun. We are planning a cruise next spring break for Disney and we can’t wait

Woow. thanks for the great post. The pictures looks amazing. We folks are geared to the Disney soon. We are currently making it part of our next plan. The food looks really amazing. Sure it tastes good too:)

I love hearing the latest Disney scoop! We are heading to WDW for a few days in July and I opted to stay at Port Orleans – FQ over Carribean Beach. Had the skyliner been definitely open, I may have thought differently!

That event must have been incredible! I’ve already met Skyliner and NBA Experience. In addition, Jaleo is already on my itinerary for the next trip.