Home about me The Good, The Bad & The Ugly Of My Third C-Section

The Good, The Bad & The Ugly Of My Third C-Section 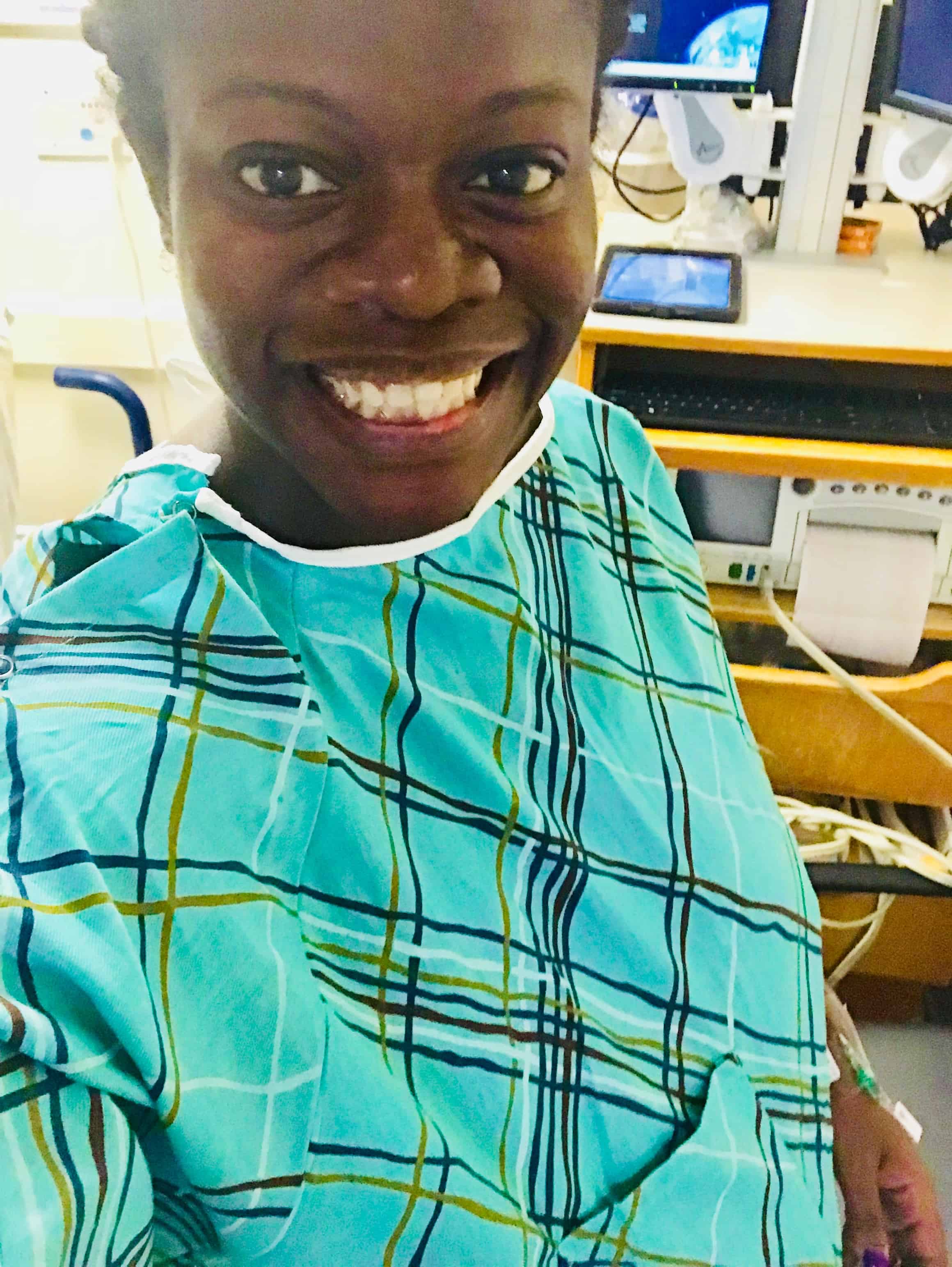 On the first Saturday of November, I was scheduled to give birth to my third child, my first girl via scheduled third c-section. I was slightly nervous about it, but I had done this twice…so I thought I had it in the bag. Things went a bit differently than I thought but the end result was this amazing baby girl that I grew a brand new heart for.

I decided to have my girl at NYU Langone in NYC. I had both boys there and I really liked the hospital. Thankfully, seven years later, my OB was still in practice so I was able to be in a familiar setting with my very amazing OB. We arrived bright and early Saturday morning 7am, and I was checked in immediately.

One of the first parts was putting in the IV. I have TERRIBLE veins and unfortunately I couldn’t utilize my handy trick of drinking a ton of water to make my veins pop up because of the pending surgery. As a result I got poked with the largest needle I’ve ever seen 3 separate times, with actual tears rolling down my face. That was fortunately the most pain I would feel for a while.

Just a few minutes after that I was ready for surgery. Less than an hour after I arrived. Everything was moving so so fast. They put hubby in scrubs and had him wait outside while I got my epidural. The epidural this time around was completely different…this time I actually felt every drop of liquid that rolled down my spine. It was super weird and uncomfortable. The fluid made it’s way down my right side especially, and I’m still feeling the effects of it, two weeks later!

Finally hubby came in. When I saw him I realized how truly nervous I was in that moment. I started to cry and he asked me if I was in any pain and I told him honestly that I was scared. Yes, I had done this twice before but laying on the metal in the freezing cold operating room is enough to rattle anyone. I cried silent tears as he forced me to talk about any and everything that didn’t have to do with what was actually happening behind the plastic barrier.

In under 10 minutes, I felt a pressure release and an immediate void and seconds later, we heard her cry. They told us how beautiful she was. We cried again, this time of pure joy. They brought her over and she looked exactly like my eldest child. I had my daughter! 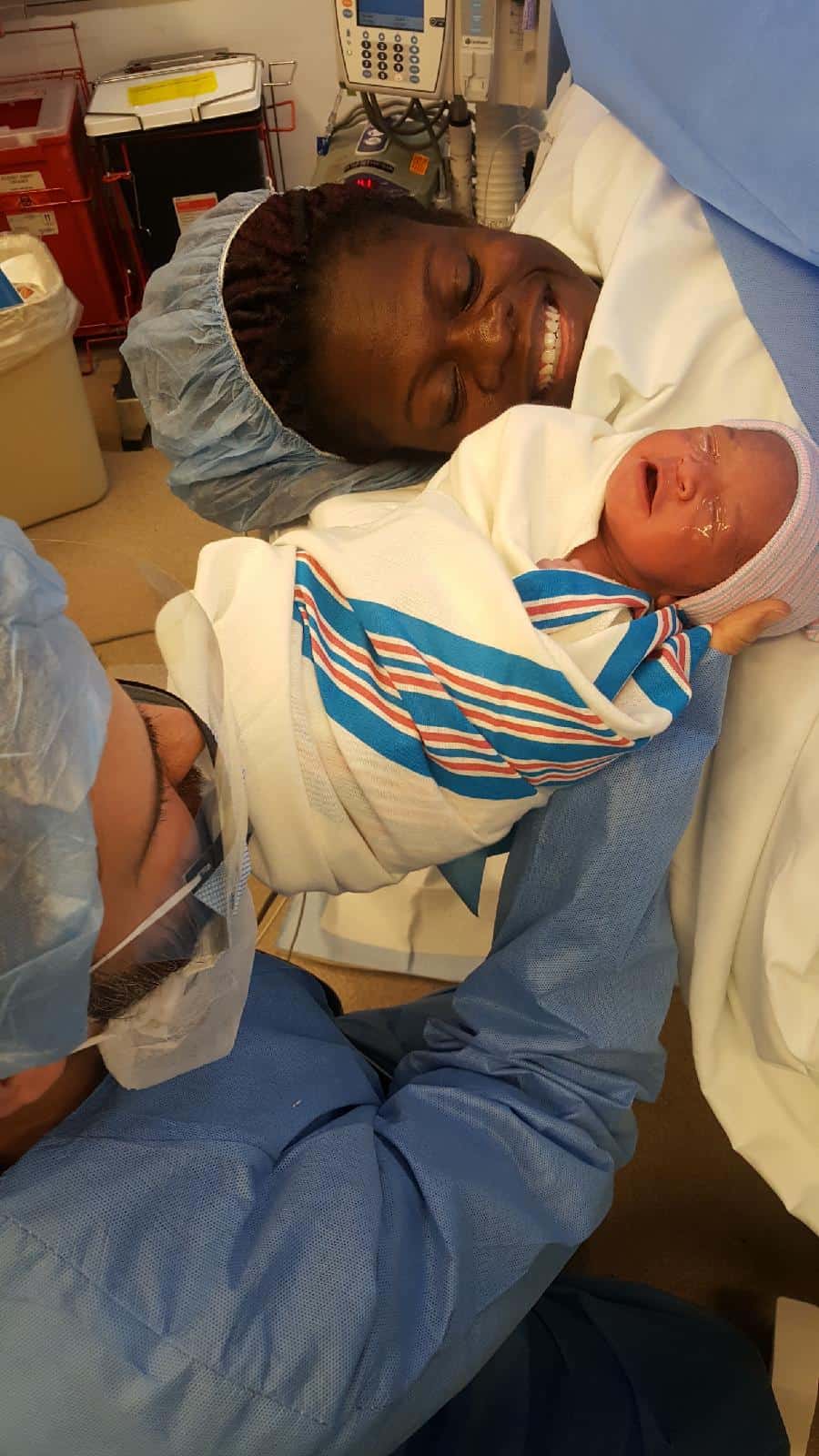 I didn’t shake as much as I anticipated, the postpartum trembles went away much faster than my last birth and I was so happy because I was traumatized by how long and how violently I was shaking. They brought her into the recovery room with me where she latched immediately and aggressively. This had never happened with the boys so I was excited to finally experience this thing called breastfeeding and all of the magic behind it. (But I’ll save that for another post) 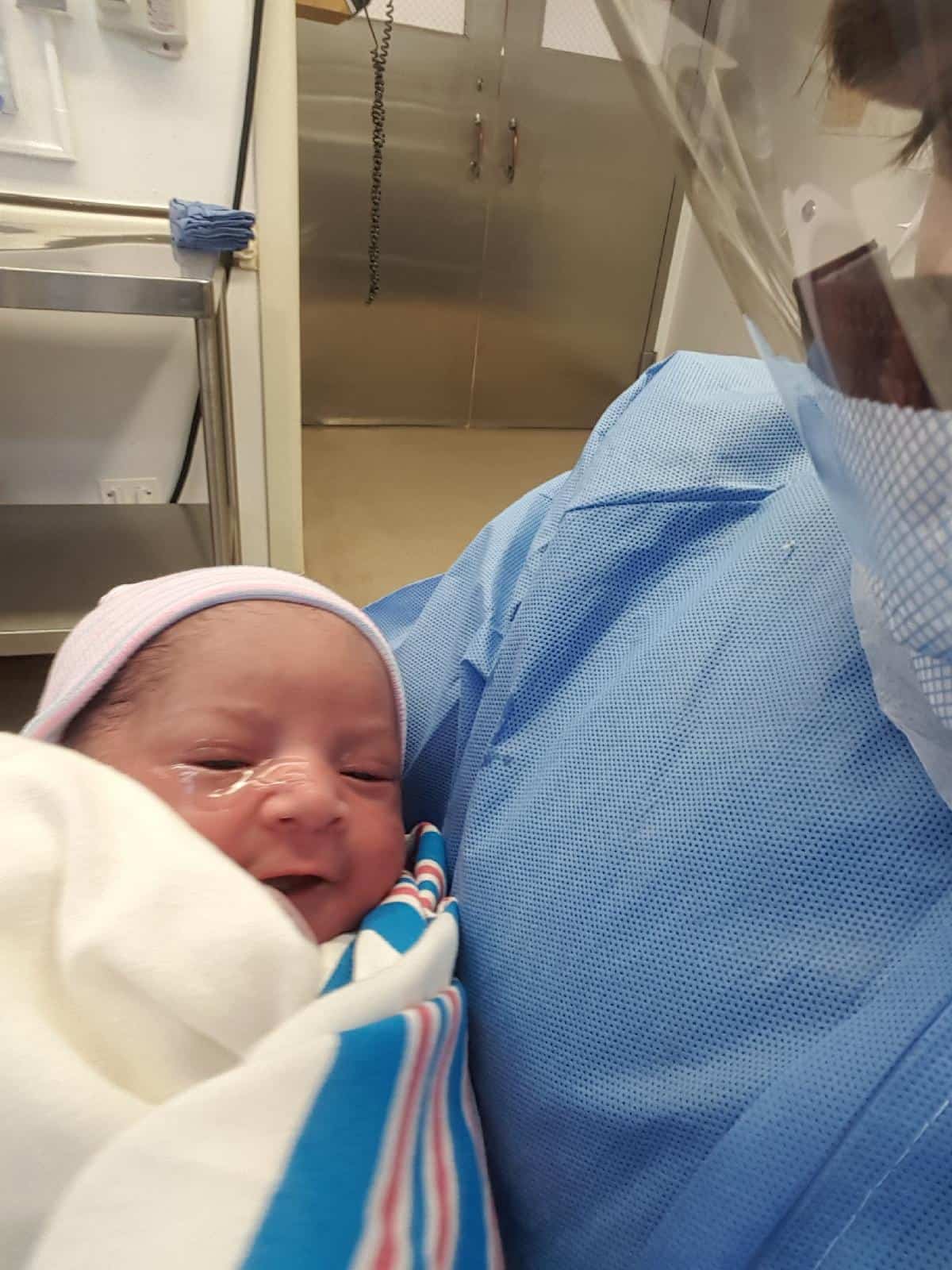 Right after the surgery they let me know that I was passing too much blood which is a common third c-section symptom. They started weighing everything that came out of me, while pushing insanely hard on my stomach. I passed some large blood clots so they let me know that I’d be on a couple of blood thinners that required injection shots to the legs every four hours. Blech.

They made me keep the epidural in until the 3rd day, and once that left, that is when the real pain began. They offered me the hard stuff (Oxycontin) but I had no interest, my OB told me about a recent study he read that proves the opioids can actually travel to breast milk and sedate the newborn. Now I had no plans to touch the hard stuff, but this convinced me for sure. 2 weeks later the pain is still there, but getting a bit better by the day (with ibuprofen).

Also? It’s REALLY hard taking care of a newborn after just having major surgery. Like SO hard. Yes I had the help of the nursery but the early days and hours are crucial for mother/child bonding. It’s tough to transfer them to the bassinet, tough to cluster feed and get up every couple of hours. I definitely felt more normal when I got home.

I was nervous about being cut in the same place for the third time in a row. It was a better experience than my first 2 but I don’t think I could do it again. If I have to I will, but man, it will be a LOT to put my body through again. I am pretty sure my limit is 3 kids, but I’m never saying never after falling in love with this girl so quickly!! 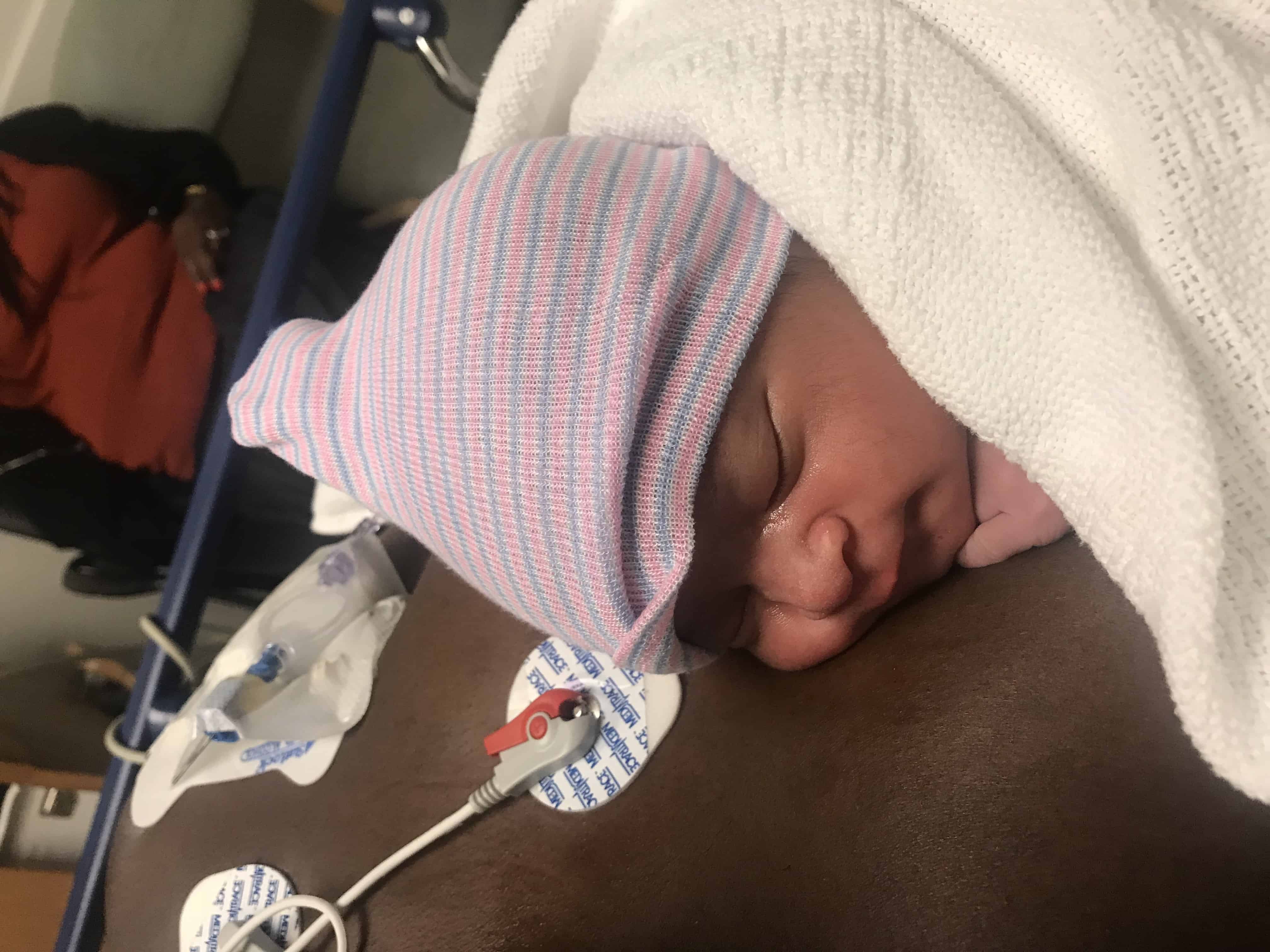 5 Real and Unexpected Moments From My 3rd Pregnancy

Baby Bath Essentials Plus Tips For Bathing A...

5 Simple Ways to Save Money on the...

The idea of another c section was one of the reasons that had me like NAWL man! LOL. But like you said, if I had to…
ANYHOO! Congratulations on your baby girl!!!

Friend. Thank you for sharing your story. I loved reading this because even though I have never had C sections, your words made me remember the feeling of the epidural, the shakes and trembles afterwards, and some of those feelings I thought I had forgotten. You are amazing and strong and inspiring. I never went for the 3rd child, and I think it will be something I regret later in life, especially reading all about the joy your baby girl has brought already.

The postpartum trembling is freaky! I don’t remember it with RJ but with Zayn I had him so fast (17 minutes after I got to the hospital) I think my body was in shock and I could not stop shaking! James kept asking me if I was ok lol. You’re such a brave mama and Jasmine is beautiful!! Can’t wait to watch her grow!!

Thank you so much for sharing your journey. I too had a c-section and reading this definitely brought back memories. I remember so vividly breaking down in tears once my husband came in the room
From fear. I never experienced post natal trembles though. And that breadt feeding is something else. I struggled a lot with it so I’m happy your breastfeeding journey seems to be going smoothly.

Oh, my lovely and beautiful friend. I felt every word of this.

Also, omg, the trembles and shakes! I try to forget them, but I have never felt so cold in my entire life.

She’s so so beautiful and my heart explodes when I see all your family pics. Can’t wait to meet her. xo

I had 3 c-sections too, so I totally get you. 3 is my limit! I’m glad you have your beautiful baby girl!! Girls are so fun and sweet. I pray the rest of your healing goes well.

I am so glad that the thrid was a charm. She is absolutely gorgeous as predicted. I didnt breastfeed all my girls but the ones I did breastfeed was a different bond. So glad to hear all things went so well and Princess Jasmine is here. So glad you shared your story sharing your C sections story may take some of the fear away for some woman. Bravo Mama!

I only have the one child but if I’d gotten pregnant again I would have been scared too knowing what to expect. He was a 10 pounder and while I handled it well the first time, if it’d happened again and I was told the truth about the size of my baby I’d probably start crying ?. I hope your pains subside soon and glad you didn’t take the hard stuff. Congrats!

My doctor told me the recommended number of csections is 3. My first one was a breeze I had my son on tuesday and I was in another state on Saturday lol. I was younger then too. 2nd one was ok but more painful. I have no plans on doing a 3rd one at all. She is a beauty! Congrats again

I’m so happy I finally had a chance to read this and say CONGRATULATIONS!!! She is so beautiful and I’m so happy for all of you. She is the perfect addition to your family and I hope you’re getting better each day and things are smoothing out, as they tend to do, after the first month.
You did awesome though the birth and some of what you described took me back 9 years (whoa!!) to the c-section with the twins, all the shakes, the epidural and how incredibly hard it was to recover from major surgery and take care of two newborns.
You know I love you woman and I’m just so incredibly happy for you all! This may be the best holiday season yet!! Keep those FB and Insta pics coming!!

Hi dear, thanks for sharing your story. My wife also had C sections for our two kids and it was an experience to always remember. I am happy for you dear. The baby is really cute

Congratulations on having such a cute baby, I hope you are doing good now 🙂